Posted by Christ Community Church at 1:38 PM No comments:

Deluxe REMASTERED Collector's Edition 2-disc re-issue of Shotgun Angel is finished and will be debuted on the Daniel Amos summer tour. Beautiful 24-page booklet with more than 30 unseen photos as well as a 26-track bonus disc loaded with amazing 4-track demos of almost the whole album, unreleased songs, plus in-studio mixes which break down the songs like you've never heard them before. It's like being in the studio with the band, listening in to musical history being made between studio genius and knee-slapping nuttiness. It will also be available on the www.danielamos.com website shortly. Also coming new versions of the first Daniel Amos record (same tracks as the first 2-disc re-issue but with an expanded 16-page booklet and digipak) and a new edition of Mr. Buechner's Dream with a new 24-page booklet and bonus track. These are being released in conjunction with Born Twice and Retroactive Records. Look for them on the tour or on the website soon.
Posted by Christ Community Church at 7:54 PM No comments:

On June 4, Terry Phillips will be doing an interview with Terry Taylor from DA on the WJTL Archives Show @ 9 p.m. Listen on FM 90.3 or online @ http://wjtl.com/listen/listen-live/
Posted by Christ Community Church at 9:58 AM No comments:

DANIEL AMOS
Few bands with roots that stretch back to the 70s still create timely, relevant music. Most of them are nostalgia acts, recycling the faded glory days of yore when they were writing and performing important music. Not so with Daniel Amos. Fueled by the songwriting genius and inimitable voice of Terry Scott Taylor, the twin guitar attack of Jerry Chamberlain and Greg Flesch, the rock-solid drumming of Ed McTaggart and the low end and high harmonies of new bassist Paul Averitt, Daniel Amos is making music that is just as fresh and vital as the their glory years. Sure, on this new tour they will reach back into their storied past for the nuggets and the “shoulda been” hits, but rest assured they will be playing 21st century music right up there with the likes of Radiohead, Wilco and Flaming Lips.
The history of Daniel Amos begins more than 35 years ago, in the toddler years of the Jesus Movement. Not many bands playing the Christian circuit were bigger in the late ‘70s, due in large part to the success of their 2nd album, the country-rock masterpiece Shotgun Angel (1977). If there were Dove awards and GRAMMYs for CCM in 1977, few critics doubt they would have been crowned kings that year. (In 2003 they became the first band inducted into the Contemporary Christian Music Hall of Fame.) They followed up this banner year by recording another masterpiece the next, the epic rock saga Horrendous Disc (1978), which sadly remained unreleased for three years. Fighting to keep the momentum moving forward, they toured endlessly, but, without the new record, which further cultivated their new rock tendencies, their country-leaning fanbase clung to the past, grew discontent and began dwindling. Never satisfied to rest on their laurels or to be discouraged, Daniel Amos pushed ever harder for creative freedom and embraced new forms and styles, both musically and lyrically, into the ‘80s. Their tetralogy of New Wave influenced records, the ¡Alarma! Chronicles, (¡Alarma! (1981), Doppelgänger (1983), Vox Humana (1984) and Fearful Symmetry (1986)) has yet to be matched on a conceptual and creative level. They ended that decade with a record that encapsulated all the growth and bravura they had accumulated during their first decade as a band and one that remains a timeless touchstone of their career, Darn Floor Big Bite (1987).
The ‘90s began the era of the meeting of the ends, in which Daniel Amos became one of the many projects Terry Taylor had to keep juggling in order to make a living. The Swirling Eddies, the Lost Dogs, solo projects, production gigs all competed for his time and energy, yet in spite of this Daniel Amos continued to make great records like Kalhoun (1991), Motor Cycle (1993), Bibleland (1994) and Songs of the Heart (1995). Touring was no longer an option but the band still gigged occasionally and continued to make fine music together. It wasn’t until after the turn of the 21st century that Daniel Amos recorded their magnum opus—Mr. Buechner’s Dream (2001). This 38-song, two-disc tour-de-force celebrated the sacred in the commonplace and showcased every facet of Taylor’s magnificent songwriting and the ingenious chemistry of this band in fleshing out his ideas into sonic glories. Many critics called this record the pinnacle of their illustrious career.
Daniel Amos hasn’t toured in more than ten years, but the upcoming summer tour of 2011 is a rare chance to experience not only the great music but also the onstage spectacle of one of the truly great bands, still in their prime after 35 years.
Posted by Christ Community Church at 4:10 PM No comments: 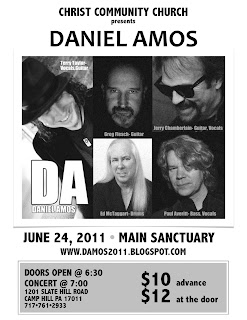 Official PA Concert Flyer
Posted by Christ Community Church at 10:00 AM No comments: 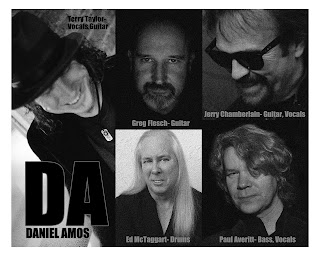 3. Use the Paypal link below to purchase your ticket.
(Paypal fee is also in ticket price)
Tickets will be held at the door. To close for shipping.

Christ Community Church
Camp Hill, PA
Type in your address to get directions to the church